Risk of dementia can be cut by one third by treating hearing loss, according to the 2020 report of the Lancet Commission on Dementia Prevention, Intervention and Care.*1

Simply wearing a hearing aid could significantly reduce the risk of developing the devastating condition, according to the review, led by Prof Gill Livingston of University College London.

The report, published by the leading medical research journal last week (July 30, 2020), assessed potentially modifiable risk factors for dementia that can be addressed as preventative interventions.

Encouraging the use of hearing aids for hearing loss and reducing hearing loss in the first place, by protecting ears from excessive noise exposure, are among the report recommendations.

Hearing loss in mid-life is thought to significantly raise the risk of dementia later on, by up to 40 per cent according to some studies, explains audiologist Dolores Madden who is Marketing Director of Hidden Hearing Ireland.

“The Lancet Commission recommends that any deterioration in hearing between the ages of 45 and 64 should be treated immediately and advises that simply wearing a hearing aid could significantly reduce the risk of developing dementia”.

Recent research by Hidden Hearing in Ireland*2 shows that people here are failing to acknowledge and treat hearing loss in large numbers.  The survey showed significant delays in the time taken by people to have their hearing tested and to seek treatment, combined with reluctance to use a hearing aid when needed.

The problem with ignoring hearing loss is that it has implications for our wider health and safety, and for that of others, according to audiologist Dolores Madden.

“Medical research has linked impaired hearing to heart health, stroke and diabetes, with depression and social isolation also knock-on impacts of untreated hearing problems”, Dolores says, adding that it makes no sense to ignore a risk factor for disease, like hearing loss, that is easy to address.

“The Lancet report shows that if all hearing loss was promptly treated, nearly one in 10 cases of dementia could be wiped out.  Hearing loss is the leading preventable cause of dementia, and so we have this enormous opportunity to prevent a disease that devastates lives”.

Hearing problems occur with age due to wear-and-tear damage to the sensory cells inside the ear.  This gradually affects the ability to pass sound signals to the brain.

One Third Over 64 Have Significant Hearing Loss

Around 15% of the Irish population suffer some degree of hearing loss, with men more likely to than women.  35% of people aged over 64 have a significant hearing loss and, in the over 75s, 50% will have age-related hearing loss.

Professor Gill Livingston, who led the Lancet Commission’s review, says: “We once thought that hearing loss was simply an early symptom of dementia.  Now we know it may well contribute to its development.

“We’re starting to see early signs that preventing it, or slowing it down, could be as straightforward as wearing a hearing aid when hearing loss starts.”

Scientists are still trying to work out precisely how hearing loss affects the brain and contributes to dementia.  One accepted reason for the link is that hearing loss makes sufferers more likely to avoid social interaction, which is a risk factor for dementia, because it reduces the amount of brain stimulation a person gets.

Isolation can, in turn, lead to depression – another known association with the disease, particularly if it affects people in later life.  Conversely, the more social contact an individual has over the age of 50, the less likely they are to develop dementia.

“It is very challenging to be part of a conversation, especially in a group, if your hearing is impaired.  Hearing loss is a simple fact of aging, like worsening eyesight, and yet people do not have the same issue with wearing glasses as they seem to with accepting hearing aids”.

Dr Sergi Costafreda Gonzalez, an associate professor in dementia research at University College London, says that tackling even a small loss of hearing early on is beneficial in terms of reducing the risk of dementia.

Hidden Hearing offers free tests to everyone and encourages anyone worried about their hearing to make an appointment on www.hiddenhearing.ie or freephone 1800 882 884.  They also provide details of grants for medical card holders, tax relief and the PRSI treatment benefit.

Without having a test, people don’t even realise they have a problem, Dolores Madden says.

“We naturally become accustomed to our level of hearing, even if it is poor.  But leaving a test until hearing is very poor means the person risks the potential knock-on impacts of other more serious health concerns”. 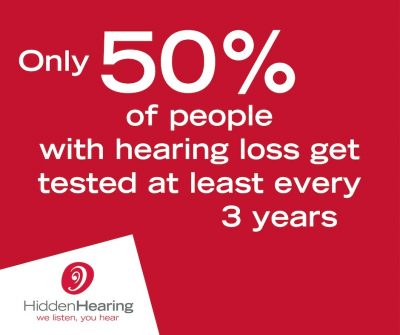