Keep Your Ears Healthy And Protect Your Hearing!

How To Help A Partner With Hearing Loss

James Heatley, an 80-year-old retired civil servant from Artane noticed his hearing began deteriorating around 5 years ago. He regularly has his hearing tested and it was at one of these routine examinations with his audiologist, Barry Douglas of Dublin’s Artane Hidden Hearing Branch, that a cancerous lump was found.

James said: “I came in before Christmas and told Barry that I had this pimple behind my ear. I had thought that it was just irritation from wearing the hearing aid. Barry thought it was strange because he had never had that complaint. He looked at it and he asked me if I had been to the doctor & I said no! I had tried putting a plaster on it but it didn’t work. He told me to go straight to the doctor who immediately sent me to the Mater Hospital for tests. Then I got word that it was cancer.” 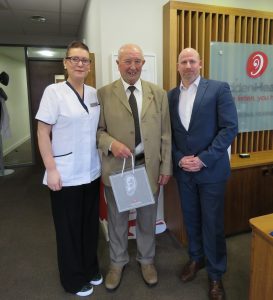 The pimple immediately worried Barry who knew it was more than just an irritation from an old and worn out hearing aid.

Barry said: “The pimple or sore – it didn’t look good. It was weeping, it was healing and weeping again. The re-occurring healing had me worried and as with any patient I told him go to his doctor.”

Although the cancer was caught in time, it had a devastating impact on James’s everyday life as he struggled to hear without his hearing device.

James said: “I couldn’t hear anyone because I hadn’t the hearing aids in. The cancer was affecting a nerve, I couldn’t sleep at night & they gave me tablets. Eventually though treatment, I got rid of it.

It was on his 80th birthday that he got the call from Hidden Hearing to say he would receive their new state of the art hearing aid.

James said: “It was the best birthday present I got. My wife was thrilled because she has been shouting at me over the tv being turned up too loud for the last couple of months. The help I’ve gotten from everyone at Hidden Hearing has been amazing. The new hearing aid will give me more confidence to go about my life and be more sociable. I was always full of confidence but since my hearing went I wouldn’t have been.”

Audiologist, Barry Douglas, nominated James for the company’s “Give Back” programme said one of the major effects of untreated hearing loss that he sees is frustration.

Barry said: “What I most commonly see is frustration & annoyance on both the persons with the hearing losses part but possibly I have seen more of this with the people that share their world. Isolation is also a huge factor in hearing loss as people withdraw from social inclusion.”

Barry, who has been working as an audiologist at Hidden Hearing for 11 years, believes hearing tests should be done as routinely as a blood test. Barry said: “1 in 5 people suffer from hearing loss and we need to change this. Hearing loss is stigmatised culturally. It’s heavily stigmatised and it’s not seen as a routine test. It’s a test that’s really only done when you are older typically. It needs to be done routinely as you would have your blood pressure checked or your eyesight tested.”

Anita Redmond, Audiological Assistant for Hidden Hearing Artane who also nominated James for the “Give Back” programme said:

“Since I started in Hidden Hearing in 2014 I have experienced along with our patients, their journey from a silent world to a world full of hearing. Everyone should have a baseline hearing check done and now our Campaign for Better Hearing is encouraging more people to have a simple hearing test done and it’s great to see that the Give Back Programme has helped so many people and this gives you great job satisfaction.”

ABOUT HIDDEN HEARING’S “GIVE BACK CAMPAIGN”

Free hearing testing is available in over 75 state-of-the-art Hidden Hearing clinics throughout Ireland, as part of the “Campaign for Better Hearing” which was launched earlier this year by Daniel O’Donnell and Majella O’Donnell, Hidden Hearing’s Brand Ambassadors. The campaign aims to improve the hearing health of the communities around the various Hidden Hearing branches nationwide.  Education and information in relation to prevention and treatment, as well as hearing aid technology, is also part of the year-long hearing health campaign.

Around *70% of hearing loss in Ireland is untreated, for various reasons; an element of which is the perceived stigma of wearing a hearing device.

*Hearing loss is shockingly prevalent in Ireland. In fact, 1 in 5 adults suffer from at least a mild hearing loss. Even among younger adults ages 18- 24, they are showing early signs of noise induced hearing loss. By the age of 55, a ¼ of the population reports a significant deterioration in hearing and by 65 this rises to 1/3.

In the region of 100,000 people may be risking the knock-on physical and psychological impacts of untreated hearing loss, which recent research has shown to include social isolation, depression, dementia, diminished heart health and stroke.

According to Hidden Hearing, Marketing Director, Dolores Madden, over half the population between the ages of 60 and 80 are likely to have a measurable hearing loss.

The Give Back Programme, which is an integral part of The Campaign for Better Hearing sees all branches of Hidden Hearing nominate a member of the community to get a free hearing device fitted. Hidden Hearing wants to drive the message of the importance of good hearing and improve hearing health in those who they feel need it because life is worth hearing.

You can now also nominate a person you feel could benefit from having a hearing test & that could be selected to receive a free pair of hearing devices through the Campaign for Better Hearings Give Back Programme. All you need to do is email: nominations@hiddenhearing.ie and in the body of the email give your name, number, address and your nominee’s name, number and address & please write a brief summary of why you would like to nominate that person for a free hearing test and potentially a free pair of hearing devices.

More information is available on www.hiddenhearing.ie or www.campaignforbetterhearing.ie. You can also call 1890 80 40 50 to learn more about the Campaign for Better Hearing.